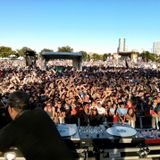 Notoriously recognized as "Obama's DJ," DJ Mel is one of Texas' most well-rounded and high profiled DJs. Based in Austin with past performances at Lollapalooza, Austin City Limits Music Festival, Tour de France, 2015 NFL Draft, 2012 Democratic National Convention, Election Night 2012 at Obama HQ, 2013 Presidential Inauguration and the White House Easter Egg Roll in 2013, 2014 & 2015. He is the Official DJ for the University of Texas Men's Basketball Team. Mel regularly tours throughout the US and abroad. He was inducted into The Austin Music Hall of Fame in 2014.