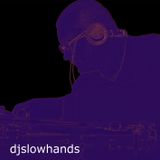 Never miss another
show from djslowhands

It is hard to describe music that defines my life in a few sentences and name it a biography. Chronologically it looks something like this: