Episode 153: Angela Entzminger - My Dad Is My Sidekick 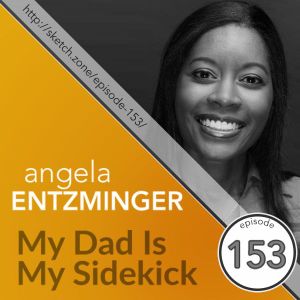 Episode 153: Angela Entzminger - My Dad Is My Sidekickby Sketch Zone

A native of Bakersfield, California, Angela Entzminger started drawing the day she picked up a crayon at age 2. Her love of animals, Roald Dahl books and watching Raiders of the Lost Ark, Star Trek IV, and Dumbo in a continuous loop guided her on her journey to becoming a storyboard artist.

She drew and wrote incessantly throughout high school and undergrad at the University of Texas at Austin where she earned a degree in Communication Studies. She has served as an Editor at Vault.com in New York City, Content Coordinator for the Denver Art Museum and as a Content Writer for Intuit. However the lure of filmmaking continued to call her name and she returned to her artistic roots to pursue her MFA in Animation/Storyboarding from Academy of Art University in San Francisco.

Her past projects include storyboarding for the AAU student films The Knight, Fetch, and Dino Hunt. She served as a founding member and Co-President of Women in Animation San Francisco and completed an internship as