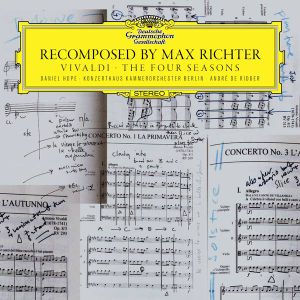 This show was 19th in the global instrumental chart.

Richter’s recomposed version of Vivaldi's The Four Seasons was premiered in the UK at the Barbican Centre on 31 October 2012, performed by the Britten Sinfonia, conducted by André de Ridder and with violinist Daniel Hope.[28] Although Richter said that he had discarded 75% of Vivaldi's original material, the parts he does use are phased and looped, emphasising his grounding in postmodern and minimalist music. The album topped the iTunes classical chart in the UK, Germany and the US. The US launch concert in New York at Le Poisson Rouge was recorded by NPR and streamed.

Just amazing. Brings Vivaldi into the 21 century like a modern lighter barock plus romance.