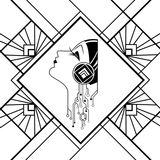 Never miss another
show from SenseNet

Dead Man's Chest Trilogy Mix Side B
by Alexander HurdReposted

Dead Man's Chest Trilogy Mix Side A
by Alexander HurdReposted

Podcast 47 - Blocks and Escher
by MetalheadzReposted

The NQ Mixtape
by The North QuarterReposted

www.SenseNetdnb.com
A DNB DJ and Producer based out of Asheville, NC with roots in the Florida electronic music scene going back to 1995, she is currently working on her first debut single to be released on Force Recordings (www.straylightmusicgroup.com). Heavily influenced by the Industrial genre (Trent Rezor, Nitzer Ebb, Jackyl & Hyde) and classic artists like Herbie Hancock and Pink Floyd her sets can go from atmospheric jungle to some deep and hard-hitting amens and two-step tracks with a darker and ominous edge. Taking cues from the mixing styles of Doc Scott, she’ll play whatever strikes her sonically, be it an old skool 160 bpm jungle track by Intense, alongside brand new releases from the likes of Dom & Roland, Blocks & Escher, and Seba. She’s very excited to have recently joined the other side of the table as a producer,coming from a classical piano background, and we are intrigued to find out what style she’ll be choosing to release as her first Single.