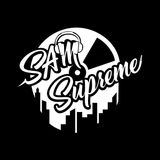 Sam Supreme is a professional DJ whose passion to create an enjoyable atmosphere for any occasion has been shown, proven and identified by all of his fans and by his ability to blend music well. His style covers a variety of genres such as, Hip Hop, RnB, Afrobeats, House Music and Garage caters for both mainstream and underground audiences.

‘From the age of 12, I was fascinated by the idea of mixing which was later strengthened by my clubbing experiences as I realised that there’s nothing more satisfying than seeing the reaction of a crowd when their ears are graced by the skills of an excellent DJ.’ (Sam Supreme, 2012)

It’s this passion and love for the art of DJing that has earned Sam Supreme a legion of fans worldwide. Ever since he bought his first decks, Supreme has gone on to fill dancefloors nationwide with his effortless skills and fusion of musical genres from Hip Hop & RnB to House.