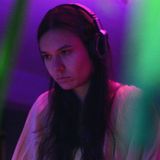 PROXIMA CENTAURI ventured into DJ-ing at 12.2014, as she believed that psychedelic culture needed more feminine energy.

Her mission is not only play music, but to also tell people something through her music. The tracks she chooses to play often express messages about consciousness, spirituality, the Great Spirit of Mother Earth and about us, as multidimensional human beings. Proxima originally started to play chill out music (mostly native american, tribal, ethnic and world sounds). She is very interested in ethnic culture and tribal-progressive; playing under the name 'Pocahontas'.

Her favourite style of psychedelic music is old school Goa trance. The music she plays under the alias of 'Proxima Centauri', is for more "space sounding” music like psy-ambient, full on and progressive. Her adventure into psychedelic music was influenced by Shpongle track 'Divine Moments of Truth'. It was 'love from first sound', and Shpongle are still by far her favourite psychedelic group.