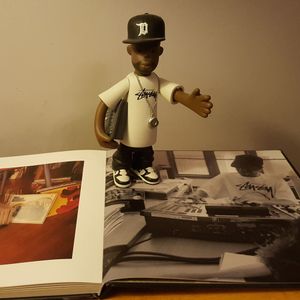 This show was 93rd in the global underground hip hop chart.

J Dilla Died 10 yrs ago today so I decided to put a mix of only tracks that he either rhymed on or produced. There is one track on here that he did neither on but its my favourite tribute verse since his untimely passing. I was in my mid teens as Jay Dee (J Dilla) came to prominence and I was an avid fan that had to acquire everything he touched from around 96 until his untimely passing in 06 and after. There's a quote I used to see going around social media after his death which I can genuinely relate to as follows; Jay Dilla Changed My Life.

The mix pic is also of my Dilla doll which I purchased from the very limited batch made last year from RapCats (don't tell my mrs how much I paid for it!). He is standing over my original copy of Behind the Beat where he is the final featuring producer and is captured in his home studio . The doll is modelled on him as he is dressed in these shots which is pretty cool considering how few pics there are of Dilla in general out there.