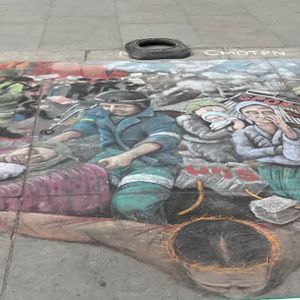 TW: WAR
When Russia invaded Ukraine on 24th February, 2022, the world stood still in shock, glued to screens as the Russian convoy advanced towards Kyiv and the air raid signal sounded endlessly in Victory Square, the crunchy audio of journalists stationed there reporting .... no change, no arrival of Russian tanks as expected. One bridge exploded in the Russian path, then another and another. The expectation that the Ukrainian capital would be toppled in three days seemed increasingly unlikely as the Ukrainian people's military practice paid off. Those three days came and went, but without surrender or peace. Areas where Russian soldiers have been driven out are still mined. Russian soldiers force children to watch their parents' murder so that the new generation will fear the Russians, scared to call themselves anything but 'Russian'. This is why we gather outside 10 Downing Street: to show solidarity with Ukraine and demand the country is better supported in its self-defence.