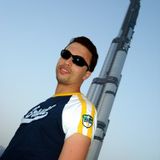 The Chillout Sessions
by Roger Borges

Music for vacuuming
by Roger Borges

The Drum and Bass Sessions
by Roger Borges

Roger Borges (Brazil, 1978) is a disc-jockey and music producer based in Spain. He specializes in dance music, particularly the Progressive House genre (inspired by Deep Dish, John Digweed, or Chuss&Ceballos), which he has spinned at countless parties in several countries - including Sweden, Germany, the USA, Argentina, even Bosnia and Herzegovina - from more than a decade, for audiences of up to 3000 people. He has recorded two independent albums in the international language Esperanto and signed contracts with the Vinilkosmo label in Toulouse (France). Roger is the brainchild of the rock group Supernova and collaborates with many artists, remixing and/or producing their songs and music videos. The DJ has been interviewed for quite a few radio and TV shows, most prominently on Spain's national broadcast channel TV2 in 2009.