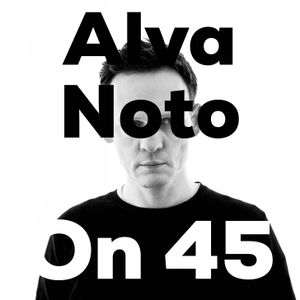 When I was a teenager there was a popular series of hit records under the umbrella title of Stars on 45, where popular songs would be combined into a medley, with a common beat and tempo underneath. It was like a kind of greatest hits of a certain artist or style of music. It was a novel and playful idea, and in conversation with my old friend Carsten Nicolai many years ago I joked about making one for him. So, almost two decades later, here’s the first of a series of special mixes I’m putting together for fun.

This mix exclusively features only the music of Alva Noto (Carsten Nicolai) and a little drum machine. The mix was created entirely live using Native Instruments Traktor and Traktor Kontrol S2 and nothing else. What you hear is what happened in real time.

perfect match made in allignment heaven - lovely mix, those stars on 45 keep on falling from the sky | burning | turning in your mind

You've started with one of the brightest Stars in the firmament.
Thanks Robin...an early Xmas present.

Has been beautiful to work to this this evening :)

Thank you! And more to come that will entertain just as nicely!