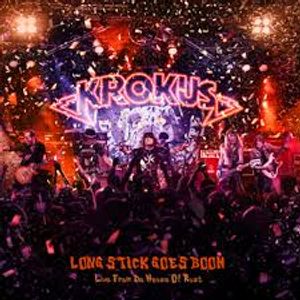 In the first hour of the show, Chris Von Rohr, bassist, producer, songwriter and founding member of Krokus talks about the band’s explosive new live album, “Long Stick Goes Boom (Live From Da House Of Rust)”, which sees the band tearing through a setlist containing a wealth of vintage Krokus favourites and fine new songs in their classic style from their recent studio albums. You’ll hear Chris’s choice of songs from the album and all the latest news on the band and their plans.

In part two, guitar legend George Lynch talks about the European release of the debut album from KXM (featuring George alongside Dug Pinnick (Kings X) and Ray Luzier (Korn)), the remastered re-reissue of the classic first Lynch Mob record “Wicked Sensation” (out now on www.rockcandyrecords.com) and his range of hand-built (by George himself!), custom-made guitars (www.mrscaryguitars.com )