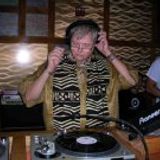 In New York was featured in many legendary clubs of the eighties, his carreer there culminating in his own Manhattan club "The Choice" which carried on the tradition of the Paradise Garage with residents Larry Levan, Joey Llanos, Frankie Knuckles, Robert Owens, Disciple and many more.

In Miami during the 90's and into the following decade he crusaded for the New York sound of soulful house music… and has remained relevant and current now into his seventies. He is one of the top ranking podcasters on Podomatic, Mixcloud, and Soundcloud. Several original tracks on itunes. And 100 pods on itunes ChillLover Radio. A weekly show on CribRafio. He has recently remixed a track for Estelle. AtlanticRecords and produced several Deep Tech House tracks featured on Beatport. He just might be the oldest working deejay in the world.