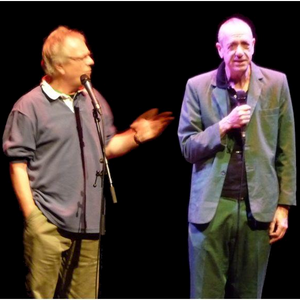 Comedian & writer Arthur Smith interviewed by Richard Oliff.
19th October 2011. 1615 (UK)
Brian Arthur John Smith (born 27th November 1954) is an English alternative comedian and writer.
In 2005, Smith turned down a lifetime achievement award from the Perrier Award organisers. He said that "Comedians rather dislike the Perrier Awards and the public aren't interested. Basically, they wanted to tell me I was old and cool; well, I know that already, and anyway, my ego is bloated enough."
In 2010, he was a Malcolm Hardee Cunning Stunt Award nominee for best publicity stunt at the Edinburgh Fringe after declaring that he would pay £100 to any journalist attending his show who would juggle fish. As a consequence, Richard Oliff, broadcast journalist and writer, did just that at Corby's Core Theatre on Saturday 29th October 2011, though he doesn't recall ever getting his £100 reward from Arthur!