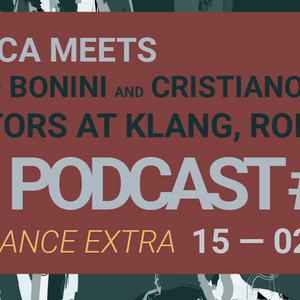 In this episode, Dronica meets Marco Bonini and Cristiano Latini, curators at Klang, in Rome.

Marco and Cristiano present a selection of experimental electronic music by curating an hour each of this mighty mixtape including artists who have performed at Klang from the Italian underground scene as well as the International scene.

Marco Bonini since 2018 music event co-curator of KLANG, a club in Rome dedicated to experimental music.
Marco Bonini is also a guitarist, arranger and electronic manipulator from Rome, born in 1981. From 2000 to 2010 he plays and record with several project in the avant-contemporary jazz scene (Roberto Gatto, Ettore Fioravanti). In the meantime he attended Saint Louis Music School , Tor Vergata DAMS University and “Licinio Refice” Conservatory where he develops passion for electronic music. From 2010 he’s founder and me