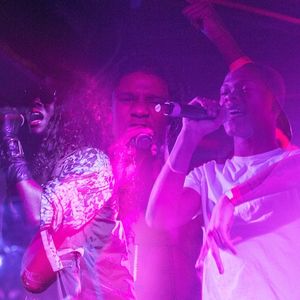 Recorded at the showcase celebrating the LGBTQ-centric label Futurehood, this episode features individual performances by Blu Bone, KC Ortiz and Kidd Kenn. Blu Bone was born in North Minneapolis, "where the rain is purple" — following a move to Chicago to study film, he connected with the Teklife crew and released his *INTO NEBULA* EP last year. Blu Bone raps and sings about everything from sex work to heartbreak, using classic house as a backdrop. Meanwhile, fellow Chicago-based artist KC Ortiz is a rapper who contrasts her DIY approach to songwriting and producing with the aesthetics of southern luxury. And teen rapper Kidd Kenn is coming quickly for the rap crown, with his 2018 debut album *Childish*, while ardently waving his rainbow flag.