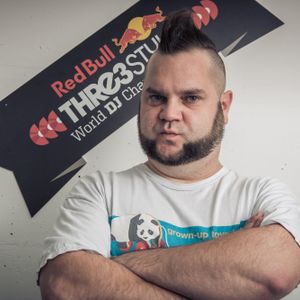 When Max Powers was a kid, his favorite toy was his parents’ record player. 15 years ago, he finally got to have his own turntables, and ever since, it’s been all over for the guy from St. Gallen. The Kraftwerk Club in Krummenau was the scene of his first steps as a DJ, and that’s why the venue to this day remains his favorite place. . His heroes, among others, are the Goldfinger Brothers, Krafty Kuts and A. Skillz. His strength, he says, is mixing difference genres of sound into a consistent set.

This mix was recorded live at the Red Bull Thre3Style National Final on May 23th in Basel, Switzerland. Red Bull Thre3style is a DJ contest that promises to be a night of dance-floor mayhem. The participants have to play a selection of at least three genres of styles of music in 15 minutes. It doesn’t matter what genres of music are chosen so long as the DJ can make them work together.