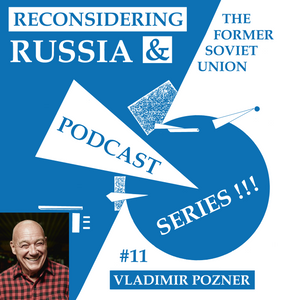 Guest: Vladimir Pozner discusses his life and career. This wide-ranging interview includes discussions of Mr. Pozner's parents' activities in the French Resistance in World War II, the Pozner family's emigration to the USSR, the Khrushchev Thaw, the reaction of Soviet society to the Cuban Missile Crisis, Mikhail Gorbachev's glasnost and perestroika, space bridges between American and Soviet societies, the Yeltsin years, the current state of US-Russian relations, and Russian society today. This interview also includes lengthy discussions of Mr. Pozner's prolific journalistic career of over 50 years, including his work presenting the "Soviet side" of the story on Ted Koppel's Nightline and other programs, his partnership with Phil Donahue, his television career in contemporary Russia, and depictions of Russia in the American press today.

Really enjoyed it ! Thank you !

Пожалуйста! You're most welcome! :)

On the whole, I enjoyed it. As a lifelong Russia maven and Russian-English translator, I have followed Vladimir Pozner's career with great interest, respecting his independence and candor while sometimes disagreeing with him. He's had quite a life. But I cannot fathom why, in an interview lasting more than an hour, there was no question about Russian interference in the 2016 U.S. election, no question about an assessment of Trump as president. Pozner may have repeated the common Russian line that the interference is more about "anti-Russian hysteria" (despite the consensus of 17 American intelligence services). And he may have declined to comment on Trump. But those questions were conspicuous by their absence.

Dear Mr. Shabad, thank you for your feedback.

As to why I did not ask Mr. Pozner about the Russian hacking issue, I can only say that I simply did not have enough time. To give you a bit of background, when I started the "Reconsidering Russia" podcast, the average interview length was about 35-40 minutes. For instance, my interview with Sergey Sargsyan, the Armenian political comedian and the "Jon Stewart" of Armenia, runs 37 minutes in length. Today the average "Reconsidering Russia" interview runs about 45-48 minutes and I try hard to keep my interviews within this range.

However, on special occasions, interviews can run for about an hour. This was the case with my interviews with Fred Weir and Mr. Pozner. Originally, I intended to ask Mr. Pozner many more questions, including questions regarding Ukraine and the Russian hacking allegations. However, an hour and 15 minutes was already quite a lot of time and I did not want the interview to spill into, say, an hour and a half. That is why I did not ask him about the Russian hacking issue. Moreover, he has addressed that issue in other interviews. Finally, as a student of history, I wanted to focus more on Mr. Pozner's biography and his first-hand knowledge and experience of Russia. Additionally, as you likely noted, I was deferential to him and gave him the space to speak about his bio. It would have been rude to interrupt him. Current events do factor into my interviews and I address the Russian hacking issue at length in my interviews with Fred Weir and Paul Robinson. However, I strive to maintain a balance among history, culture, and politics on this podcast.

As to why I did not ask Mr. Pozner about the presidency of Donald Trump or Trump's performance as president, I am not certain how such questions are necessarily relevant to the focus of the podcast. In other words, these are questions that deal with American politics specifically. As the name of this podcast implies, the main subject is Russia and the former Soviet Union, not the United States. It is true that Fred Weir did briefly touch on socioeconomic dynamics in the United States in my interview with him, but I never asked him directly about the US election or the candidates. He simply discussed this issue within the framework of US-Russian relations and the Russian hacking allegations. So, overall, that is my explanation. Again, thank you for your feedback and I'm glad you enjoyed the interview overall. There will be more soon. :)

The question about Russian "interference" in the election would only waste time, because Vladimir Posner does not know the answer. His guess would be as good as yours, my or "Reconsidering Russia". The signs of anti-Russian hysteria and rabid Russophobia are clearly present and reminiscent of the initial stages of McCarthyism. I am surprised and bitterly disappointed to see it in a "beacon of democracy". There are 3 categories of people that ask that question: 1st category are those whose question contains positive answer. They ask it either for confirmation of their belief or to pick up the fight ,if the answer does not conform to their view. The 2nd category are those that are skeptical , based on total absence of facts but open to discussion, if the facts miraculously surface. These people also want to know what are those 17 agencies and why so many that consume taxpayers money in a first place. And the 3rd category are those who do not really care because warmongering and corrupted Clinton scared them to death and made Trump a preferred candidate, Russians or not.