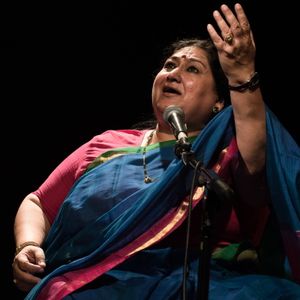 Born into a musically dedicated family, Shubha Mudgal has been trained by some of the finest musicians and musicologists in India. In addition to being a performer, Shubha has also won recognition as a composer, and is the recipient of numerous awards including the Padma Shri (Government of India, 2000), the Gold Plaque Award for Special Achievement in Music (34th Chicago International Film Festival, 1998), and the Yash Bharati Samman (Government of Uttar Pradesh, 2015). She has been closely involved with several projects related to music education in India, was a Visiting Research Professor for traditional music at Goa University, and a Visiting Professor for the Performing Arts Program at Ashoka University. Shubha has been actively involved in efforts to strengthen artiste's rights and together with tabla player Aneesh Pradhan has established an online distribution platform for musicians specialising in diverse forms of Indian music.