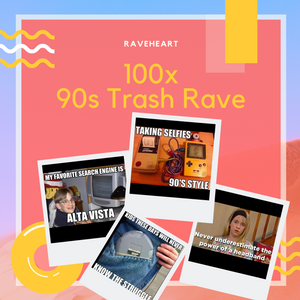 The 90s mix you probably didn't expect. In reaction to the current 90s hype, I thought I gotta do something. But the world really doesn't need another mix filled with Mr. Vain, Barbie Girl and Coco Jamboo. Instead, I digged deep into the forgotten german 90s rave tracks (some dutch and english too), probably considered trash today and even back then. But don't get me wrong. I don't hate these tracks, they are fascinating. Mostly really weird pieces of music that only worked out in this particular period of time, after Marusha cleared the way for commerical rave cover-versions into the german top 100 in 1994, this door was open for these kind of tracks for only 2-3 years and damn, what weird tracks were showing up up back then. Here are the 100 weirdest 90s trash-rave tracks I could find. Don't take this mix too serious. I just had hella fun making this and I hope you will have some fun with it too. ;)
Let me know what you think. I probably have enough tracks left to make a second one.