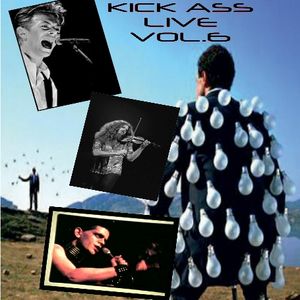 here's another set of some killer live classic rock bands together for a festival of rockin' fun. PLAY IT AS LOUD AS YOU CAN STAND IT! you know, for a real being there experience. rg

By your reply it just really just shows how f'n old i am. lol
But yes if you haven't heard David Live at the tower theater yet...get your hands on it. no he didn't pack his spacesuit he just took it off left it laying on the floor and put on that fancy schmancy suit. That album is just a very soulful, funky & rocking overview of his work up until then. And also you may want to check out a more complete and a little rawer (that's a good thing) Cracked Actor los angeles '74. its smoking hot! win win either way discovering that era bowie vibe on friend rg

Brilliant show, this one, Randy!
I echo Johnny's sentiment; sweet format!
And all from live shows I hadn't heard before! (I've been missing out.)
Have a fine week, Sir!

I have a hard time believing a man of your music appreciation and vast knowledge have not heard anything off those classic live albums...but since you haven't. very glad I could turn you on too them! happy times lhm! rg

Believe it, Randy. Believe it.
Obviously, I need to go on a live, classic rock expedition!
Also keep in mind, I didn't start caring about music until the mid 80's.
Btw, thanks for confirming that Bowie still performed some of his "Ziggy" songs even shortly after he put his space suit in storage (now, that final Ziggy show I AM familiar with! ...as well as some Floyd shows after RW's departure, i.e. Delicate Sound of Thunder and Pulse; only recently did I hear some of the Pompeii film for that exploration of Echoes show I made; and yes, your edit of that show will be listened to, post haste).
Thanks!

I like this format where you focus on four diverse groups... with meaty live slabs from each. Rock on...

More from rgodsey aka funky honky