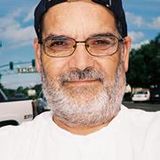 Hi everyone! I love music and also enjoy writing songs on my guitar... I stand in the truth and try to be honest! I also like having lots of musician friends !

My name is Ramiro Martinez. I love MUSIC more than anything. I was born in Zacatecas, a central State of Mexico, and raised in Guadalajara, Jalisco. I lived in Tijuana during 10 years before moving to Oceanside, CA. When I was a Teenager, I learned to play acoustic guitar and after learning a few chords, I wrote my first song. To save my songs, I recorded them to an old reel to reel tape recorder.

In the 80's, I played guitar, electric bass and keyboards with a Top 40 Band. We played gigs at parties, weddings, bars and so on. In the 90's I played the roles of roadie, agent and manager. While living in Tijuana, I recorded a Gospel Album (I