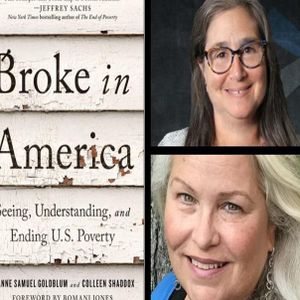 Over 40% of Americans are living in poverty, where they have no resources that can help them through hard times. These are people of every race, gender and age. It is in this context that Radio With a View spoke with the JOANNE GOLDBLUM and COLLEEN SHADDOX, co-authors of "Broke in America: Seeing, Understanding, and Ending U.S. Poverty," on BenBella Books. Joanne Goldblum is a social worker and the CEO and founder of the National Diaper Bank Network. The network encompasses more than 200 member organizations who are providing assistance to families in need across America. Colleen Shaddox is a journalist, activist and playwright whose work often has focused on those left marginalized in our society, including the poor and the incarcerated. Today’s show also features a tribute to activist/performer ANNE FEENEY. Music featured includes Bruce Springsteen’s “The Ghost of Tom Joad” and Anne Feeney’s “Dump the Bosses Off Your Back,” “War on the Workers,” and “For Gene Debs.”