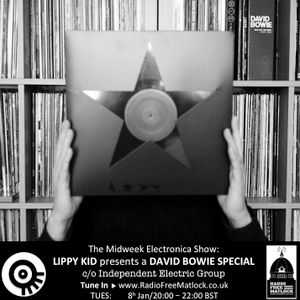 The Independent Electric Group presents another Midweek Electronica Show, with their host, Derbyshire electronica musician, Lippy Kid.
On what would have been his 72nd birthday, we throw over our show to celebrate in the genius of David Bowie.
The show includes a number of contributions the actor Helen Maksoud who played Angie Bowie in the BBC Radio 4 drama 'Low'; From Darryl Webber, the co-author of the book 'The Man Who Fell To Earth' produced by Studio Canal to commemorate the 40th anniversary of the films release; And from Simon Philo the music Author who recently produced the book 'Glam Rock: Music In Sound and Vision'.