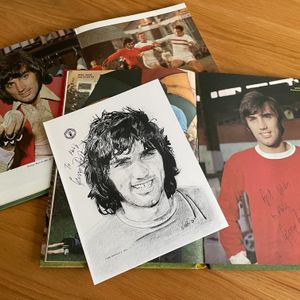 As Steve Harley says in our latest Connections Show - " George Best was such a hero". Join us as Cockney Rebel Fans share their wonderful memories of the one and only George Best. You'll hear fantastic music, classic GB adverts, goals and hopefully timeless memories of the footballer they called "Simply The Best".

Excellent show Stewart. I was never a Manchester United supporter, but was always a fan of George Best. As a youngster growing up in Glasgow anyone with any interest in football loved George Best. Like a few people who contributed to your show I too had a pair of Claret/Black lacing up the side Stylo Matchmaker George Best boots. Unfortunately the only George's I resembled on a football pitch were George Formby and George Roper. Fortunately I had the pleasure of watching George Best play a few times at Hampden Park in Glasgow for Northern Ireland v Scotland in the old and still sadly missed Home Internationals. His presence alone was always worth the admission money. I also saw him play for Hibs against Rangers at Ibrox and at Hampden for a Rangers/Celtic Select v Scotland in a Testimonial for those people who sadly died in the Ibrox disaster. Apparently in his boyhood days in Belfast Rangers was one of his favourite teams......so we gave him a heroes welcome on the pitch at Hampden. A true footballing genius and legend in the days when the word 'footballing genius' wasn't thrown around like confetti at a wedding, like it is in these money is king, sanatised days of SKY and the Premier League. Once again great show and thanks for the memories. ps Great shout from Sean...."Positively 4th Street"...my favourite Dylan song.