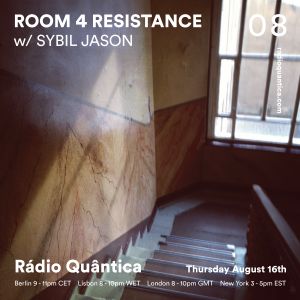 Room 4 Resistance Radio is back on the Quântica airwaves for episode 8 of the show with a special guest mix from Sybil Jason !

Sybil Jason is a Haitian-American DJ, producer & photographer from New York City. Since 2004 she has been involved in NYC underground music scene, most notably as a DJ. In 2006 she set up a music blog named FARCED, which is home to her various mixes & podcasts. In 2017 and 2018 Sybil played steady dates across the US & Europe while keeping dance floors on their toes with her signature non-conforming sets. Guest mixes for shows on Rinse.fm, NTS, Radar London along with THE FADER and Truants mixes have cemented her unique DJ style.

The first hour of the show is as per usual in the hands of R4R residents Luz & Doc Sleep.
Enjoy the show !

The R4R radio show is broadcasted on Rádio Quântica every months.
This show was recorded live on Thursday August 16th, 2018.