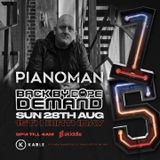 Never miss another
show from Pianoman

PIANOMAN GOES TO THE ZONE
by Pianoman

Paul G - Mix Factor 2019
by Slip Back In TimeReposted

James Sammon established his name and Pianoman brand during the early nineties House Music boom, where he self released a series of white labels under the alias of PCP. One of the tracks called "Whitney Tune" taken from Volume Two became and instant club anthem, due to its hands in the air piano breaks and big lush strings sound. Several other EP's followed as Sammon began to run his own label called Piano Choons via legendary UK/Italian House label Disco Magic UK. Over a period of two years tracks were produced and released, which are now anthems on what is called these days the Old School scene. This included tracks such as Tribute To Asha, Cast A Spell, Revelation, Rock And Move, Pump This Party, Together and Day Dreaming. In 1994 James produced and pressed up 300 copies of a bootleg track he made that he called "Blurred", on account of it containing a sample of Damon Albarn from the indie group Blur, by this time using the name Pianoman. The track "Blurred" was an overnight success