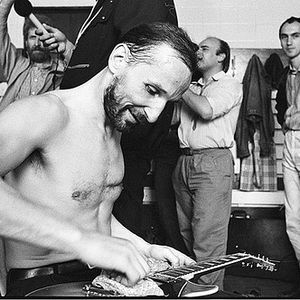 An interview with Russian band Zvuki Mu after the release of their first album produced by Brian Eno (who I interviewed 10 days later).

From Wikipedia: "Zvuki Mu (Russian: Зву́ки Му [ˈzvukʲɪ ˈmu], roughly translated as "The Sound of Moo") are a Russian alternative rock/indie/post-punk band founded in Moscow in 1983. Lead singer and songwriter Pyotr Mamonov is one of the most revered and eccentric figures of the Russian art scene, whose absurdist lyrics are as playful and disturbing as his vocal style and explosive on-stage presence."