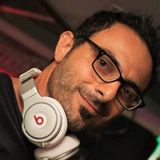 He has started as a radio producer at local radio stations back in 1993. However, his passion for music was big enough to induce him to play music in front of a crowd. Has dj-ed in almost all of Larnaca's clubs (i.e. Dracula, Alchemies, Preserve, Blue Martini, Rebuke, Old Market str, Joel, Bastet, XS Club Makenzy, Makou, Cherry beach bar, Angels, Iguana, Vogue, Spy, Paradiso, Plateia, Members) since 1996! He is currently djing in major parties and events with MusicMatters and has residencies at Joel, Alchemies Bar and Bastet. Has a very good knowledge of different kinds of music and he has the ability to understand the crowd.