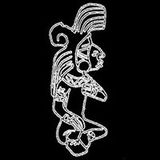 DJ Trava has begun with profesional djing in 1995
and became a resident of legendary club Bunkr. From
the year 1996 he moved into the most popular czech
club called ROXY where he playes as a resident from
the beginning. In 1999 there was the best clubbing night
in Czech Republic called SHAKE also in the club ROXY.
In 1997 he produced a month regular night called MIX.
The MIX night in ROXY has been continual till now.
This party was awarded as a best party of the year 2000.
Since 1997 DJ Trava is one of the two members and
a composers of the project SIGNIFICANT OTHER.
At the beginning of the year 2001 SIGNIFICANT OTHER
produced its first album called MONGO.LOVE.

One of DJ Trava's track was a part of the Cafe del Mar compilation.
DJ Trava is owner of the label Lex Record.

Awarded as a best DJ of the year:
1999 [ according to magazines Tripmag,