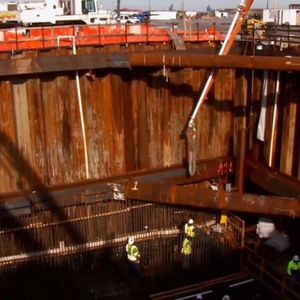 Watch Video | Listen to the AudioBy Christopher Booker and Connie Kargbo
Read the full transcript below:
CHRISTOPHER BOOKER: Residents of Portsmouth and Norfolk, Virginia, have grown accustomed to their morning rush hour traffic.
For commuters moving between the two port cities, there’s a daily choke of cars leading into this 54-year-old tunnel with only one lane running in each direction under the Elizabeth River.
Since it opened, the tunnel’s daily traffic volume has tripled. For the past four years, Wade Watson has overseen construction of the relief valve &#8212; a new midtown tunnel with two additional lanes running parallel to the old ones. This new tunnel is on schedule to open later this year following an innovative approach to its design.
WADE WATSON: There’s about 80-thousand cubic yards of concrete in this tunnel.
CHRISTOPHER BOOKER: The tunnel is designed to last 120 years, and it was less expensive than traditional steel tube construction.
Nearly a mile long, this all conc