IN THE JAZZ ROOM 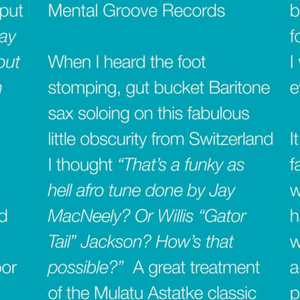 IN THE JAZZ ROOMby Paul Murphy

This show was 86th in the global jazz chart.

"Can you come up with an hour long mix featuring some tracks from the album and with some other stuff in the same vein?" said the man. "Yeah sure enough!"
So there's also some Cal Tjader from "Fritz The Cat" soundtrack, Antonio Hart on a re-mastered "Sticks", the late Jeanne Moreau arrives in time, funky jazz soundtrack from Terumasa Hino and finally blowing up and out with Herbie Hancock.
Plus: Mythical Beat Mambo from Amsterdam, Soul Jazzin' Mulatu, Jazz Dance Fela, Estonian jazz from Brazil and a Hip Jazz grunger from Chip Wickham.

Thanks for the Mamblues - Cal Tjader reminder!! I remember buying a copy from Patrick Forge when he worked at Reckless Records back i n the mid to late 80s! Great selection of music, thanks!

the Don, as always! No one does it half as good