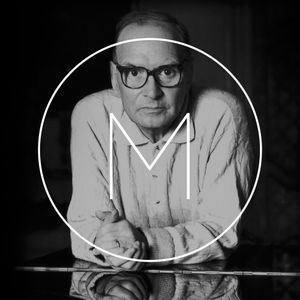 Ennio Morricone was an italian composer (1928-2020). A favourite pupil of Goffredo Petrassi, he also deputized secretly for his trumpeter father in a light music orchestra. He thus developed two distinct sides to his musical personality: one led him to embrace serialism and the experimental work of Gruppo di Improvvisazione Nuova Consonanza; the other gained him a leading role, principally as an arranger in radio and tv. Morricone achieved wide recognition with Sergio Leone's westerns. Since followed key collaborations with directors Bernardo Bertolucci, Pier Paolo Pasolini, Elio Petri, Paolo and Vittorio Taviani, Valerio Zurlini, Roland Joffé and Brian De Palma.
Morricone's non-film works form a large and increasingly widely performed part of his output. Many of them use his technique of ‘micro-cells’, a pseudo-serial approach often incorporating modal and tonal allusions, which, with its extreme reduction of compositional materials, has much in common with his film-music techniques.