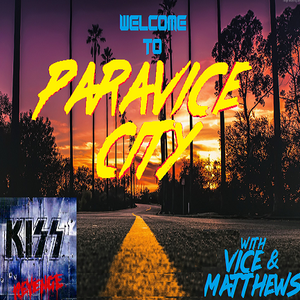 In this special episode block, Chad Vice & Kevin Matthews dive into Kiss' 1992 album 'Revenge', by playing all the albums songs and discussing facts and stories about the album - plus what they like about it!

Revenge is the sixteenth studio album by American rock band Kiss, released on May 19, 1992. It is the band's first album to feature current drummer Eric Singer, following the death of former drummer Eric Carr in November 1991, and is the group's last album to feature musical contributions from Carr. Marking a stylistic departure from the pop-influenced glam metal sound which characterized much of the band's 1980s output, the album reached the Top 20 in several countries, being certified gold by the RIAA on July 20, 1992