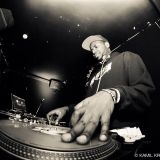 Ireland dopest/Illest turntable Dj - Dj Ozz G originally from Angola & living in the Republic of Ireland since the early age of 16, has been playing for some of the biggest venues around the world, along side some of the biggest names in the music industry, ever since he embraced the entertainment world.

Dj Ozz G is the official Dj of Mic-A-Blaze Record Label, as well as the host of ''Urban nights'' around Galway city - Ireland - He is also an affiliated member of Angolan Scratch Djs, an Angolan based turntable - HipHop crew/Djs.. !!