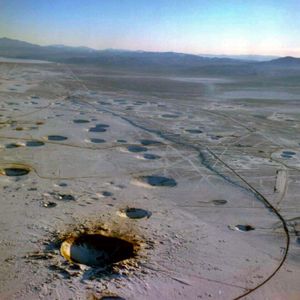 21 year-old Matty Roberts didn't think his "Storm Area 51" facebook page would result in a visit from the FBI, but 2 million online RSVP's prompted an emergency response from authorities. Though the organizers of Alienstock announced the cancellation of the festival, curiosity regarding Deep Underground Military Bases (DUMBs) continues to grow. Well-known installations like Area 51 are only the tip of a monumental iceberg. At least 129 DUMBs occupy the United States, constituting a subterranean empire that costs trillions of dollars per year, reaches miles below the earth's surface, and employs an army of contractors, soldiers and intelligence personnel. What is taking place at these bases that is so secretive it must be kept underground? Researcher Richard Dolan describes the level of technological inequality enjoyed by the military-industrial-complex as a "runaway civilization" so far ahead of known industrialized capabilities as to be unrecognizable by most American citizens today.