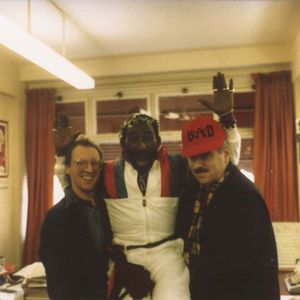 Wonderful show, thank you to all involved <3

In memory of our old friend Lee here's the second half of a three hour On the Wire programme broadcast live on a Sunday afternoon on 16th December 1984.

It was Scratch's first visit to On the Wire. Also present was our late friend and super Scratch fan Roger Eagle who brought with him some rare Upsetter 45s to impress Lee. Scratch flipped though the stack and using a biro ticked the labels of the tunes he remembered (!) and approved of.

On the Wire will be presenting a more considered tribute to Lee "Scratch" Perry, one of the twentieth century's greatest record producers, in the near future.

Thanks to Jethro Engineer No.2 for archiving the show and also to Michael Hodgson and Patrick Dokter for safely transferring the audio from the original quarter inch tape source.
Steve Barker

Thanks for posting this, Steve. Awesome session! Pain relief from the loss of the master. Saw him a couple of years ago here in San Francisco - he looked barely 60, was dancing all over the stage. Rest In Dub, Lee Scratch Perry.

Visionary, genius, mystic, inspiration force. He was indeed the MIGHTY mighty Upsetter. This legendary meet-up with Steve at OTW showed Scratch’s warm, human, and funny side as he discussed his rich and varied past. Safe travels Scratch!