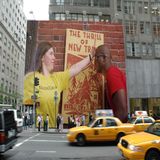 Never miss another
show from Oryn The Rebel

Oryn the Rebel is a vocalist, lyricist, performer, producer, and voice over artist. . He was born in Newark N.J. and raised in Bloomfield N.J.