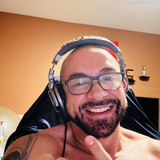 Chicago native. I grew up listening to funk, disco and r&b. I started following Ron Hardy @ the Music Box and Frankie Knuckles @ the Power Plant and witnessed the birth of House Music without knowing it. We called it underground music since there was no radio play back in those days. The Hot mix 5 on WBMX was also an influential scene that played a big role in the cities House music roots that helped showcase the emerging scene. I got my break in 1988 on Chicago's northside and built a following. I like many sub genres but have always returned to what I loved best which is just plain good house music.