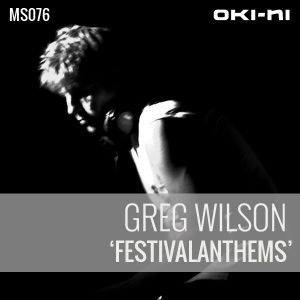 What turns a song into a full-blown, hands-in-the-air, anthem? Greg Wilson thinks he knows, and if there is anyone who is qualified to make the distinction, it is the former Wigan Pier and Haçienda resident.

Here's what Greg has to say about his mix:

"As part of the promotion for my upcoming Tokyo date at Rainbow Disco Club I was asked to list my top 10 festival tracks. I came up with a dozen that fitted the bill and could rightly be called anthems, having all done the business for me in a big way at some point during the past 6 or 7 years, since I started playing at festivals in the UK.

"Looking for a theme for the oki-ni mix I'd just been approached to do, I glanced at this list and thought it would be interesting to hear all these climatic tracks together in one mix."

Takes me back to when tunes were pure. Back to basics is an understatement

Everyone should listen to this