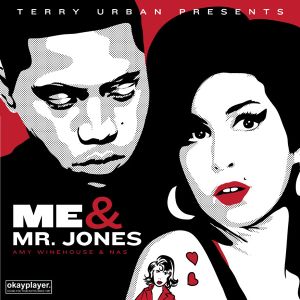 It's officially the Juneteenth of July, folks. The 4th of July is upon us and the sidewalks in NYC are hot enough to melt vinyl copies of Stevie Wonder's Hotter Than July LP into overpriced ashtrays. Summer time is here, that's what I'm trying to say. For us, July means 2 major things in 2012 that it did not in 2011--1) on July 17th Nasir Jones' Life Is Good LP will hit you in the face like a blast of hot air off an express train. And 2) on July 23rd we will be recognizing the 1st anniversary of Amy Winehouse's passing. So we could not really think of a better way to recognize the fact that life is beautiful and also bittersweet than with DJ Terry Urban's incredibly appropriate mix of incredibly dope music from both artists, together again on the concept-driven project he titled simply: Mr. And Mrs. Jones. We present it here as an Okayplayer Mixtape Mondays exclusive--the 3rd in our series including Sam Champ's D'Angelo Live and DJ Low B's Roots Picnic Mix. Stream it exclusively on OKP

Oooh back listening & just had to roll by again & send good vibes in gratitude for the sounds :)

yeah man. Diggin' the blend of beats. Appreciate your share for enjoyment of us musical mortals.... Merci ! Much appreciated. Respect sent with peace & blessings. Missy :)