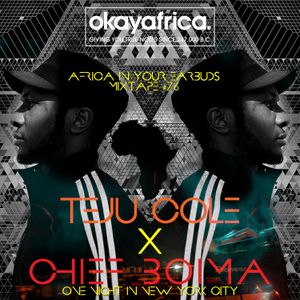 For our latest Africa In Your Earbuds, Nigerian-American author Teju Cole continues where his 'One Night In Lasgidi' mixtape left off.

Instead of Lagos, Teju's new selections—which are expertly mixed here by Chief Boima—soundtrack one of his nights out in New York City which, as he explains in his accompanying original short text, are "many and varied... but more and more... neither white nor, in any simple way, black."

Get lost in Teju Cole and Chief Boima's AIYE #76 mix of Nigerian, West African, and Caribbean sounds and read Teju's thoughts about the his nights out in NYC over at Okayafrica: