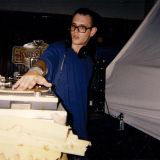 HI! I've been an underground house music dj since 1994. I've played all over the US. I've lived in Knoxville, TN, Atlanta, GA, Kansas City, MO, and now San Diego, CA. While in Kansas City, I was lucky enough to work with DeepFix Records. Not only were we a household name for underground house from 2001-2007, we threw a crazy sick party called Frisky with all of our favorite Djs ; Derrick Carter, Luke Solomon, Mark Farina, Diz, Wally Callerio, DJ Sneak, Hector Moralez, DJ Heather, Miles Maeda... you get the picture. They also play my tunes! I've been producing since 2001. I've been on a bunch of cool labels like 1200 Traxx, Sampled Detroit, and Greenhouse Recordings. in 2008 Uriah West(one of the coolest guys in the world, and one of my best friends) and I started Audio Indika. It's a house music label focusing on quality, not quantity. I have a weekly in SD called House music Fridays At The AC Lounge. You can catch me and tons of great djs there!!!