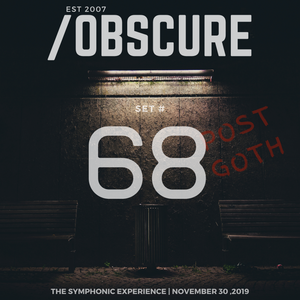 So this set had a mission (and revenge, for those of you who get it).
I wanted to collect a few songs that could represent what I have come to call Post-Goth.
With that term I mean tunes and bands that sound like old school goth (circa 1985) but have been released after 2010.
Yes, I know that's a pretty wide definition, and in the meantime there has been a flourishing of genre definition, various "waves" (cold, dark, whatever) but all that, all those waves, inevitably go back to the pillars of darkness, the fathers of goth. Hence Post-Goth :)
Ok, enough with that, let's go back to this set. This is not mixed, it's dark, starts rather powerful, has a more introspective moment along the way, goes back to power. I hope you'll like it!
As always, support the artists, like, repost, comment. I appreciate it <3
Tracklist in comments :)
Love
xx
/obscure