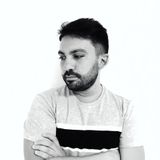 Nicolas Benedetti is a DJ/producer born in Buenos Aires, Argentina. He introduces in the world of electronic music when he was a child, following the musical tastes of his parents.

At the age of 15 years, he starts trying to do some mixing, just for fun. He was very influencial in artists like Guy J, Jonh Digweed, Hernan Cattaneo, Henry Saiz, Danny howells, Nick Warren and many more.

His favorite genre is progressive house, but he also likes techno and melodic techno, and all the variants of house music.

In 2018 he decided to start his musical career as a producer.