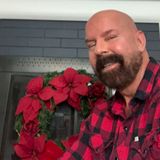 I started as a DJ in 1983 at a small but popular club in Philadelphia called the Black Banana. I also created a visual experience that went with the music for the clubs. I have spun at the
Roxy New York and have had installations at the Limelight. I was a club kid and promoter. My inspirations come from places in New York I remember like The Spike, 12 West and The Saint, Danceteria, Area, Susanne Bartsch Events, The Roxy, Sound Factory and Paradise Garage.
In Philadelphia the Catacombs was my place of inspiration musically. DJ David Todd, Soul, R&B, Disco, The Philly Sound and House were a major part of my music influence.

In London clubs like Heaven & Taboo in 1980s inspired me with Eurodisco & High Energy. In the mid 1980s I experienced the House & Acid House movement. I brought allot of that culture back to the States with me when i returned from living in London.