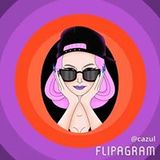 Naz Chris hasn’t listened to anything yet!Hopefully they will soon. Why not recommend some shows to them?

Naz Chris was born in London. She is of Japanese and
English descent.She spent the majority of her youth in London New Delhi and Japan where she got a taste for the characteristic Euro bass,where she first garnered attention as a DJ and MC also Party organizer.She is still one of biggest organizer and DJ in a young generation 'because She has been doing a job related to radio and a music magazine for more than 10 years. During her rise to fame, Naz Chris worked with Techno DJ "Derrick May"and "Claud Young" and so on at Radio programs ,an artist who is credited with giving her exposure in her early career as a director and DJ. She performed at "EDM Beach Party Mumbai","Big Summer Party by Volcom" and Live broadcasting at "Tomorrowland" held annually during the penultimate weekend in July in Boom, Belgium in 2017.
Aiso, Naz Chris forms "NAZWA!" a DJ duo, side group,unit and collaborative project with Watusi (COLDFEET) in 2018.