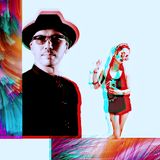 Never miss another
show from NAZWA!

NAZWA! (also known as Watusi (COLDFEET) and Naz Chris (PLAYCOOL/Volcomunity) were a Japanese and an English/Japanese special DJ duo, side group,unit and collaborative project consisting of electronic ,Techno,House and Nu Disco music producers Watusi and Naz Chris formed in 2018.

NAZWA! performed at the Biggest Night Club in Tokyo "Contact Tokyo”, "ageHa","Sound museum Vision” and all over the world each other 1998-2018. About Watusi,better known by his another band name COLDFEET, DUBFORCE and TDO, is a Japanese famous Bands, bassist,record producer and record executive based in Tokyo Japan. Naz Chris was born in London. She spent the majority of her youth in London where she got a taste for the characteristic Euro bass,where she first garnered attention as a DJ and MC also Party organizer. She is still one of biggest organizer,Director and DJ in a young generation ‘because She has been doing a job related to Radio and a music magazine for more than 10 years in Tokyo.