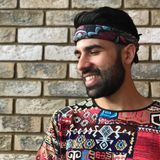 Electronic music DJ & Producer from Spain based in London.
What is his style? Emotion and groove is something that you will always find in his music but he prefers to not get into sub genres because at the end of the day it all originates from House & Techno. Good music is good music.

Navin’s passion for house & techno began in 2012 when he started to listen to deeper and more underground electronic music, such as the early Hot Creations records. It then became a way of life for him, constantly researching artists, new music and waiting for the weekend to come so that he could go to the clubs. He has not looked back ever since.
5 years later and with the music still growing so much in him he realised that this feeling was here to stay so he decided to learn the craft of DJing and producing. His musical journey has progressed in a very natural way since then.

He has played alongside artists such as Apparat, Dominik Eulberg, Adriatique, Stimming, Eelke Klejin & Bob Sinclair.