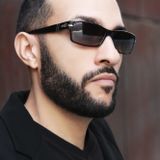 Never miss another
show from NativeOrigin303

Who would have guessed that the freshest sound in dance music could come from an artist who takes it back to the old school? The name NativeOrigin303 may be new to electronic music fans, but his music speaks for itself. Whether crafting beats or building a set, the Denver DJ and producer draws from a multitude of genres to result in a style all his own.
When NativeOrigin303 got his start DJing in the late ‘90s, ravers could go to an underground party expecting to hear multiple types of electronic music. In an era in which producers follow fads more than ever before, he’s made it his mission to revive the old vibe. NativeOrigin303 is the label head at Blue, a house label which has had releases from Onionz, Eddie Amador, Alessio Cala', Alex Rider and Angelo Ferreri to name a few.
His budding discography has already landed him features in DJ Magazine, Euphonics, Dash Radio, KISS FM, as well as television appearances on FOX.